“Road traffic injuries simply cannot be justified as a cause of death in 2017 as the world gets ambitious and conscious to achieve Sustainable Development Goals. As a society, we ought to do, what we ought to do ” – Dr Edmond Fernandes, CEO, Center for Health and Development ( CHD Group), Mangaluru, India.

Road traffic injuries constitute a major public health problem all around the world. But low and middle income countries face the biggest challenge due to lack of political will, inherent lethargy to innovate and absence of an institutional framework which safeguards road users.

At the Center for Health and Development (CHD Group)- Mangaluru city, Karnataka, our team has come up with a road user ID card which ensures the immediate details which is necessary for any Good Samaritan or volunteer who takes the victim to the nearest health system.

The number of people dying on Indian roads and the number of those getting injured is large and the 108 ambulance service takes more than 10-15 minutes to reach the spot, whereas an Uber or Ola can reach within 2-5 minutes.

The impact due to blood loss, shock and loss of limbs can be very huge and at this point, the victim often would not be in a position to divulge the details.

I was confronted with this situation lately, when I was rescuing a road accident victim. He was using a smart phone and listening to music while riding the bike, when he crashed a few 100 metres in front of me. He unfortunately lost his fingers and was in a state of shock, counting hours before he thought he would be dead.

I could not unlock his smart-phone because it was a finger-print locking system and a search in his wallet did not have any ready reference card where I could alert his family, his treating doctor, know his insurance detail, see his preferred hospital name and also understand his blood group and know whether he was an organ donor as well.

That’s when this idea came by. Every citizen must ensure that they carry the ID card with the details which makes road use not only safer but also puts in place a mechanism that fast tracks assistance when in need.

Road traffic injuries as per estimates will be the third largest contributor of global disease burden by 2020. About 83% increase in road traffic deaths will take place in low and middle income countries which predicts a global increase of 67% by 2020.

It is necessary that countries like India, where thousands and thousands die on the roads, get injured and among others get impaired; that concerted road safety strategies and efforts are brought out. 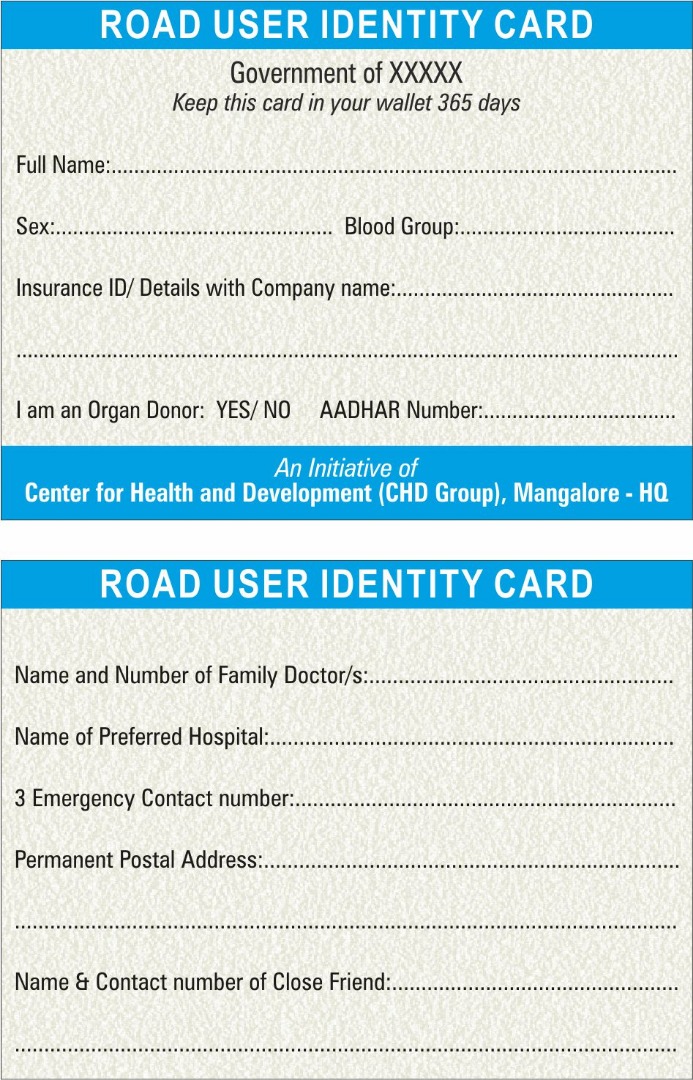 An easy win for the Government of India and the state governments would be to create this road user ID, the forms for which could be made available at Road Transport Offices ( RTOs), Banks, District offices, city corporations and education institutions and also downloaded online from the transport ministry website.

To relax complicating the process, there is no need for a photograph and the card serves mainly as an essential information about the individual. This card will be useful even if the person has been lost and found, missing and to also to undertake random security checks and verifications.

Should any government decide to implement the same, all that is necessary is the form attached with a gazetted officer seal and submitted to the RTO or Traffic police to process the card after basic verification. This will indeed be a gift to the people of India and the nation state.

Well meaning civil society organisations can also promote the usage of the card among communities and individuals. I would like to end with a quote by Ernest Greenwood,‘Accidents and particularly street and high way accidents, do not happen, they are caused.’