I have worked hard over the years, spoken about it and time & again impressed upon the importance of disaster management and the act 2005 with the Revenue- Secretary to Karnataka. My number of attempts to do so fell on deaf ears. I wasn’t even talking about the policy level dialogues existing at the world stage. I never talked about Sendai Framework, nor about Sustainable Development Goals, much far away from Bangkok Principles or Hyogo Framework for action.

Hopeful as I was, I also met then Hon’ble Chief Minister, Shri. H D Kumaraswamy hoping that disaster management as a discipline and as a science will be strengthened invoking all provisions of the DM Act 2005. I was wrong. My numerous visits to the corridors of M S Building went in vain. Naturally because of not having a political God-father who would see scope in the Act from a lens of a vote bank perspective.

It takes 60 years to build something, and 6 minutes to be destroyed from any disaster. India loses $ 10 billion every year from disasters. The Prime Minister’s agenda for smart cities by default becomes a watershed moment in history when existing mechanisms are not strengthened.

While the High Court of Karnataka called the approach of the state as a disaster, it may well be recalled that the when I filed a PIL in the Supreme Court of India in January 2017, the then Chief Justice of India, dismissed the PIL as not important when number of mechanism were in place. Today we see divergent views of different courts for issues which cater to civilians and remain of immense public importance. 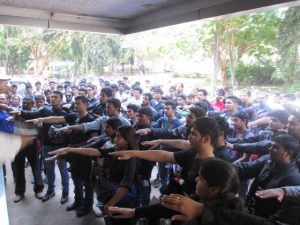 Recently the High Court of Karnataka noted that only one meeting was held and appropriate rules for implementation of the act was not framed. The Disaster Mitigation Fund has always been on paper, the court said.

However, the case in point I wish to make, is that disaster management cannot be improved by holding cosmetic meetings. Real action needs to transpire on ground. The Court must invoke clause under Section 17 and sub-Section II in-order to improve the states’ governance in disasters. Also the High Court must invoke clause under Section 28 of the Act. Only by doing so, will there be serious consideration and accountability.

Disaster management calls for a multi-stakeholder engagement. Let me tell you an interesting incident which happened some years ago. I had submitted a proposal to the Department for understanding Coastal Resilience in Karnataka. The proper channel was followed and after the comments were made by Revenue – Secretary to Government, the file disappeared.

What does one conclude of such attitude? If the High Court has decided to take the plunge to correct this rot, I plead that a mechanism be put in place to hold all concerned accountable, right till the case worker.

On another instance, let me introduce you to fashion medicine taking place in Karnataka. There is a group of people who have been promoting Dengue drops as a vaccine to prevent outbreak of dengue in Belgaum. These bunch of funny characters have been going door to door, telling villagers to use the drops so that the mosquitoes can no longer harm. Modern medicine is yet to find a vaccine for Dengue and alternative medicine has none at this stage. Mechanisms to arrest such people must be immediately put in place.

Disaster management is too serious a business to be left in the hands of selected people whose commitment is of questionable repute. It’s a question of India’s citizens, our children, our near and dear ones who are our very own.

The time to perform is now.